Considered one of Atlanta’s most affluent neighborhoods, Buckhead is a highly desirable, beautifully established community of trendy high-rises and multi-million dollar estates. With a vibrant nightlife and highly regarding dining scene at its core, fashionistas and home owners with a penchant for interior design will find a shopper’s paradise among a bevy of upscale Buckhead boutiques and the two malls at Lenox Square and Phipps Plaza, featuring such recognizable anchor stores and brands as Bloomingdales, Burberry’s, Coach, Fendi, Giorgio Armani, Jimmy Choo, Kate Spade, Macy’s, Nordstrom, Prada, Ralph Lauren, Sax Fifth Avenue and more. For entertainment, Phipps also offers a LEGOLand Discovery Center and 14-screen AMC Theatre. 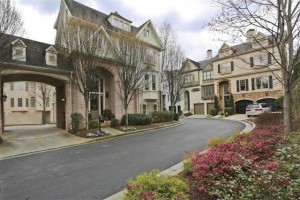 Relatively “young” in terms of the life of a Southern city, Brookhaven was incorporated as recently as December 2012 – making it one of Georgia’s newest cities. Comprised of 12 square miles and a population estimated at around 49,000 people, Brookhaven is also representative of DeKalb County’s largest city. While it hasn’t been a city for long, its reputation as one of Atlanta’s premier communities is long-standing. What once served as a large plantation established by John Evins in the early 1800s would eventually be transformed to a playground for Atlanta’s wealthy set, as they began building summer cottages around the turn of the century “far away” from the hustle and bustle of Atlanta’s thriving Downtown area.  By 1912, the Brookhaven Country Club golf course was founded, but sold three short years later to Capital City Club. Gorgeous homes designed by some of the most highly revered architects of the time began to pop up around the sprawling golf course – in an area now known as Historic Brookhaven. As central to the community as Historic Brookhaven, but with more of a youthful vibe, is Town Brookhaven – a thriving mixed-use development with more than 460,000 square feet of prime retail real estate that touts itself as a “pedestrian-friendly urban village.”

We invite you to check back to our blog regularly to view helpful articles about home buying, green building, renovations and interior design.  You can also learn the latest Highlight Homes news through our “Spotlight on Highlight”, read about our newest homes and renovation projects, view terrific before and after photos, and much, much more. For more information about Highlight Homes or to suggest your own blog ideas, visit our website at http://www.highlighthomesga.com, e-mail us at info@highlighthomesga.com or call us TODAY at 678-873-9234.