Highlight Spotlight: The City of Chamblee 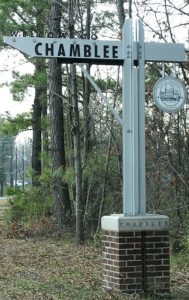 One of 10 cities in DeKalb County, the City of Chamblee was incorporated in 1908, but that’s not where its story begins. You’d never know it from the bustling epicenter that now lies between Buford Highway and Peachtree Boulevard, but the City of Chamblee was once rolling pastures dotted by thriving dairies like Irvindale Farms Dairy and Brown Dairy.

Like many towns in Georgia, the arrival of the railroad led to the transformation of the landscape in the late 19th century. Located at the junction of what is now the Norfolk Southern Railroad and the Roswell Railroad, Chamblee was a “just passing through” spot on the map for countless passengers traveling from Atlanta to Charlotte, NC on one line and textile workers travelling to and from the Roswell Manufacturing Company on the other.

In response to World War I, the landscape was transformed again when the land that once housed dairies became a military installation called Camp Gordon in 1917. Comprising two square miles, 1,200 buildings and 40,000 military personnel, Camp Gordon gave birth to a city – including retail shops, theaters, hotels and even a bowling alley to serve this new population. Once the war had ended, the installation closed only to reopen nearly two decades later as a Navy Flight Training Center during World War II. With peace at hand, the City of Chamblee gained the attention of large corporations such as Frito-Lay, Kodak and General Electric – leading to the city’s own “industrial age.”

In the years since, the City of Chamblee has also caught the eye of small business owners, builders and homebuyers alike. Conveniently poised between I-285 to the north and I-85 to the south and surrounded by affluent neighboring cities like Dunwoody and Brookhaven, it is no longer a “just passing through” spot on the map. Chamblee boasts the South’s largest collection of antiques and an extensive array of auto dealerships featuring brands like Lexus, Alfa Romeo, Mini Cooper, Audi, Porsche, Infiniti, Volkswagen and Maserati, just to name a few – earning it the name “Chamblee’s Motor Mile.” With a fitting tagline like “Community Feel, Global Appeal,” the city is every bit as distinctive and diverse as its population. Its undeniable international flair and eclectic collection of eateries has made Chamblee a go-to destination for foodies seeking a memorable and cultural dining experience. Chamblee is also home to six beautiful parks, the popular Chinatown Mall, DeKalb-Peachtree Airport and a number of community events such as the Taste of Chamblee Festival, Summer Concert Series, Antique Row Holiday Open House and more.

With a number of our homes situated in the nearby cities of Brookhaven and Dunwoody, Highlight Homes is excited to soon add the City of Chamblee to the list of Atlanta neighborhoods where we have a presence. Stay tuned for details as our next luxury new construction project takes shape! To learn more about Highlight Homes and to contact us to express an interest in a new semi-custom home in Chamblee, visit us at www.highlighthomesga.com and fill out our contact form! One of our team members will be in touch with you shortly.